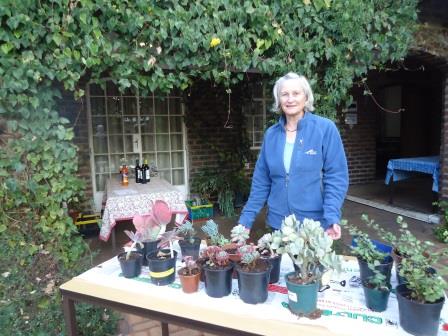 For the second year, JAEI screened eco movies on a wintery Saturday evening, this time at St Francis of Assisi church in Parkview, Johannesburg. Since the eco-movies are a fundraiser for JAEI, our intern, Michelle, popped and bagged corn, and we shared wine, sparkling Oros (for the young and brave), and hot soup with rolls. We had home potted plants (mostly indigenous but that is a work-in-progress and a rather humbling exercise) on sale (see pic).

First up was “Jane’s Journey”, the autobiographical story of Jane Goodall, primatologist and activist. Ms Goodall’s organisation Roots & Shoots is primarily aimed at young people and requires any projects to be concerned with each of people, animals and the land. Her compassion is riveting and inspiring, even as she ministers to folk who hunt her beloved chimpanzees for food!

The second movie was “The 11th Hour“, a series of conversations on the urgency of our environmental plight linked together by Leonardo DiCaprio. Bart, one of our viewers, was so impressed by the arguments made in the movie that he advised it be ‘mandatory viewing’ for congregations. The video holds supplementary interviews, the ‘religious’ section of which interviews a rabbi, a priest, and an imam, with other faith traditions also represented in the movie. Faith was a linking asset in the fight for Mother Earth’s (and our own) life.

We raised funds, modest though at R860 and as compared to last year, as our attendance was poor (was it the cold, or the French Open women’s tennis final?). Publicising is a ‘growth’ and a challenge area for us. We would welcome a skilled volunteer! We look forward to next year and the ongoing evolution of this event.